A unique web feature built by the artist themselves featuring tweets mentioning the words “My Funny Valentine”, YouTube videos, a www.rdio.com playlist of over 30 versions and a free mp3 download.

http://vday.thesongproject.net pulls in live feeds of Twitter users saying or mentioning the words “My Funny Valentine”, as well as, selected YouTube videos featuring the song and finally a www.rdio.com playlist of over 30 versions of “My Funny Valentine”. Additionally, it features The our arrangement which can be freely downloaded or shared by anyone visiting the web site.

Masters of their instruments, Mark Rapp (trumpet) and Derek Lee Bronston (guitar), are also technology wizards. They created an iPad application dubbed “The Applum” as a means of releasing their First recording together, Art of the Song, vol. 1. Its repertoire was born out of instant messaging Garage Band tracks, which turned into a full blown interactive music application. Ever on the cutting edge of new technology, they are currently in the process of working on a set of application releases to be available for both iOS and HTML5 in early 2012. The impact their work is having on the music industry is clear. One year after the release of their Applum, pop icon, Bjork, used nearly the same technology model to release her new music. 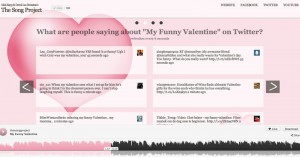 In 2010, Mark & Derek (The Song Project), long time musical cohorts, began recording and sending Garage Band tracks to one another via iChat, constructing what Derek would describe later as ‘social improvisations.’ “We began doing arrangements of tunes over Twitter and iChat and ended up with a whole new repertoire.” Searching for a way to create and release tracks online while Mark was living in Geneva, Switzerland, and Derek in Brooklyn, their model was developed. But it wasn’t long before the project was taken public. In Spring 2010, they did a short, East Coast US tour and in Switzerland. In Geneva they were approached to do their !rst official recording. The Art of The Song, Vol. 1 was released to a sold out crowd at The Blue Note in
NYC in October 2011.

Mark Rapp holds a Bachelors in Performance from Winthrop University and earned his Masters in Jazz Studies from the University of New Orleans under the tutelage of Ellis Marsalis, continuing to live and play in New Orleans for 5 years. He has now lived in NYC for 9 years, performing and releasing 4 diverse records, including leading and recording the closing track of Disney’s CD “Everybody Wants to be a Cat.“ The CD also features Roy Hargrove, Dave Brubeck, Esperanza Spalding, The Bad Plus, Joshua Redman and more.

Derek Lee Bronston is an experienced, multi-genre New York based musician. He has 7 records as a leader and co-leader, and sideman appearances on many others. Hailing from Detroit, he’s played with Cecil Taylor, Tom Harrel, Billy Bang, Branford Marsalis, The Hush, Mostley, Jerry Gonzalez and Dave Binney, to name a few. He continues to record and tour internationally as a singer/songwriter/guitarist.

The group’s music exemplifies astute genre bending and blending in the jazz idiom to create a signature sound as a band. In duo, trio or quartet formats, their live shows continue to ignite audiences, extending jazz interpretations into music ranging from Radiohead, Paul McCartney, AC/DC to Cole Porter, Miles Davis and more. With captivating guitar and trumpet interchanges, enhanced with raw, emotional vocals, The Song Project explores the art of the song as written and improvised.